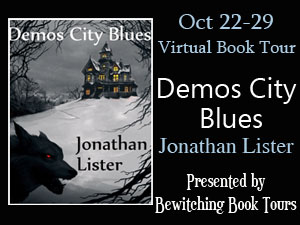 DEMOS CITY BLUES is the continuation of the Demos City Reports series I’ve been writing since around 2010. It’s the second book in what may end up being a trilogy or a quartet – not sure yet. The setting is a noir urban fantasy and the characters are dealing with personal struggles and splintered families all while trying to discover what it means to be who they are.

At the core, the main character, Leon Gray (I had E.L. James beat by two years!), is an ex-con trying to deal with his troubled past and raise a teenage daughter on his own. They also happen to be werewolves (zing!). In this book, we see the struggle Leon has with his obligations as a father versus that dirty past that just won’t let him go. As he finds out, the rabbit hole is deep.

I think personal experiences absolutely inform how you create as a writer. I try to stay away from basing characters on actual people, mostly because they tend to sue you if they don’t like what they read. Demos City in and of itself is actually an amalgam of Baltimore and Harrisburg – two places I grew up. If the sidewalk can file a lawsuit, I’m probably in deep trouble.

Family and what it means to be a family are the core themes in this series. Leon is trying to keep his daughter away from a traditional werewolf pack structure, which he feels is too rigid, but in doing so he’s caused Shauna (his daughter) to miss out on knowing her extended family. That tension is common I think in any family setting where you have relatives no one talks to, or old history no one talks about. It’s taboo – even if no one in your family is a supernatural creature. The most interesting thing isn’t the claws; it’s how you live with them that keep the pages turning.

I’m a nerd in almost every aspect. I’ve played tabletop strategy games since I was 15 (looking at you Games Workshop) and I’m thoroughly dedicated to several sci-fi shows on multiple television networks. Being Human (American) has to be my favorite right now. It’s just so…normal? Is that fair to say?

I’ve also played the guitar since I was 15 and have tried to make music as much a part of my free time as it’s a part of my career. I love going to shows, concerts, anything with a live band really.

It’s like picking your favorite child! I like them all for different reasons, though Chester is my favorite of right now. He’s a reanimated soul caught in the body of a stuffed fox. I can make him say and do just about whatever I want since he’s the irreverent soul of a London dockworker. The freedom is immensely rewarding and also fairly hilarious.

This book is part of a series and the next (and possibly last) book in it has our intrepid heroes confronting the root of the evil that’s been spreading through Demos City since the beginning of the first book. Family issues become resolved or complicated to a permanent state of broken and the penultimate events decide the fate of the residents of the city going forward.

Sufficiently vague? At least that’s how I want to draw it up. I’m currently writing the third book. A sneak peek at the prologue is actually available on my blog for general viewing pleasure right this very minute.

Talulla Rising by Glen Duncan. Read everything that man has ever written. Seriously, go them all right now. You won’t ever be disappointed. 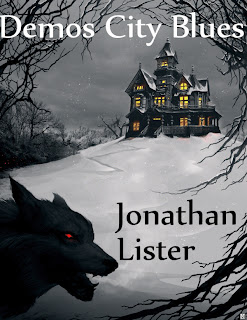 War is coming to Demos City -- in more ways than one. Leon Gray struggles to balance a new job with helping his daughter Shauna navigate the landmine life of a full werewolf. Further complicating matters, a new Alpha has arrived in Demos, laying claim to the territory as her own -- including Leon. Meanwhile, the political information David Hastings unearthed may reveal a much darker truth than anyone expected. Demos City's corruption has deep roots, older than the bones of the town itself.

Can Gray and Hastings keep the city from tearing itself apart long enough to discover the source? Can it wait until Leon sees Shauna's high school play? As the first snow falls, the flakes may only have bloody footprints to greet them on the earth below. 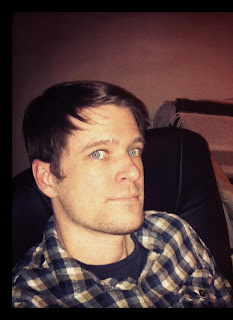 Jonathan Lister lives in the Philadelphia area and is a full-time writer. He holds a Bachelor of Arts in English from Shippensburg University and a Master of Fine Arts in Writing & Poetics from Naropa University. His work has appeared in outlets of USA Today, The Houston Chronicle, Matter, Square One and Image Magazine among others. He wrote his first two books in 2009 from midnight til 4 a.m. while waiting tables during the daylight hours. DEMOS CITY BLUES is his second urban fantasy novel. Jonathan drinks too much coffee and appreciates your time.