Did you know that reported episodes of public drunkeness in Chicago actually increased during the years of Prohibition? Or that banning liquor resulted in a rise in organized crime?

Research is full of fascinating tidbits, and I could spend all my time researching, if only I didn’t have a story to write.

My research for my novella, Prohibited Passion, began with a phone conversation. My great aunt lives in southern Alberta, right near the US border. Coincidentally, she’s very close to a ghost town called Whiskey Gap. The town’s reputation is well known in the area, and a quick search on Wikipedia brought up more information, including a link to an NFB short film (http://www.nfb.ca/film/days-of-whiskey-gap/) and further links to information on Prohibition.

I can’t say enough about the excellence of Wikipedia as an aid to finding primary sources for research. I read an interview with a fellow named Jack Woodford, who knew Al Capone. A book of essays entitled ‘The Twenties: Fords, Flappers and Fanatics’ provided information on the temperance movement, the dry decade, and new freedoms for women.

YouTube taught me how to dance the Charleston (http://www.youtube.com/watch?v=xPW1bBlzBb0) and gave me clips from the 1920s and 30s (http://youtu.be/TRveIIe4uAs). Best of all, films like Pandora’s Box, with arguably the world’s most famous flapper, Louise Brooks, and Scarface (from 1932 and based on Al Capone) helped to bring the feel of the era to life.

Once I have that feeling, I start to write. 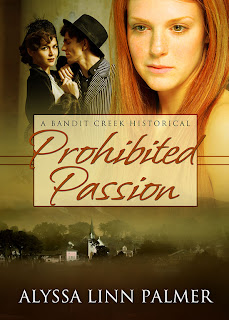 Ruth wants to escape the boredom of Bandit Creek and the strict expectations of her father, the local pastor. Her life changes the day she meets CeeCee, a world-wise flapper, and an irresistible attraction develops between them. She’ll be disowned and shunned if anyone discovers their prohibited passion, but can they keep their growing affection a secret?

CeeCee is drawn to Ruth, but things become complicated when her gangster companion disapproves of their liaison. He’s in town to broker a deal with the owner of the local speakeasy, and he’s not above using them to further his own plans. Can CeeCee protect Ruth and their budding relationship?

As Ruth gets drawn further into their world, she must decide between her familiar life and a new, dangerous path with the woman she loves.

Alyssa has many passions. Fortunately, none of them are prohibited. When she isn’t working, she’s writing dark tales inspired by mid-20th-century noir books and films, cooking up a storm in her kitchen, and reading.