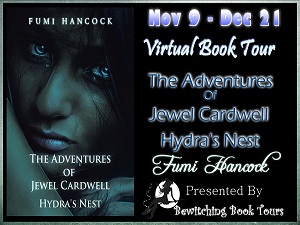 The Adventures of Jewel Cardwell: Hydra’s Nest : A unique & thrilling African ambiance not familiar to many!

Lying gracefully between the Vaal River in the north and the Orange River in the south, the rolling grassland and fields of crops rising to a lovely sandstone mountain, is Milner Court, Bloemfontein, a suburb nestled in the middle of Free State, South Africa.

The Adventures of Jewel Cardwell: Hydra’s Nest magically transports its readers from the rolling hills of Bloemfontein to the beautiful farmlands of Bela-bela South Africa. It is a fantasy-based coming of age story of a rebellious 17 year old teenager who (through no fault of her own) is thrust into an environment ridden with unfamiliar and unsavory demonic activities when admitted into a prep school in South Africa.

As Jewel Cardwell is relentlessly being trailed by an unapologetic family curse, she races against time to find answers before the curse wipes out all of her loved ones.

In the midst of this demonic war, she becomes entangled in a love triangle between a young rugged-looking Darwin Morton who she grew up with on Milner Court and the very wealthy and popular high school soccer team leader with the silver spoon in his mouth, Eric Broder.

And as they say in Hollywood, the saga continues ….http://www.worldoffumihancock.com/ 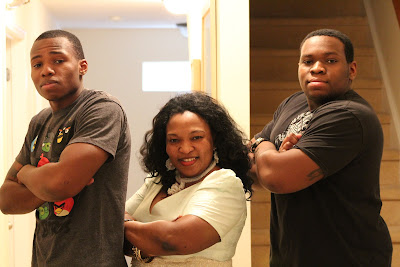 I am a proud mother of two boys both in college. Hooray!
If yes do you find it hard to juggle writing and parenting?

When my kids were young, it was incredibly hard to find time to myself especially as a newly divorced young mother. Now that they are in college, they have actually become a rewarding asset to me. They remind me of how young adults speak and their expectations when reading novels. They also helped in doing the initial editing before it went to the editor.  I am very grateful for that.

Arhh… yes! My trips to Africa truly inspired me to dig further into using it as the setting for my book. Other popular fantasy books like the twilight and Amanda Hocking’s Tryll series have used the US; Harry Potter used certain parts of Europe.  I wanted to bring something even more spectacular and unique.

Though many of my characters are not true-bred Africans; The Adventures of Jewel Cardwell: Hydra’s Nest truly explored the dynamics in their lifestyles. It also exposes the way they mingle or co-exist with each other.

In addition, I had to do a lot of research on South Africa as well as other parts of Africa.  I pulled from my pool of experiences while born and raised in West Africa.  All of these provided the framework for my FANTASY novel.

Besides Jewel Cardwell, Jewel Cardwell’s sidekick, Kaya Darkling, the Sorcerer’s daughter was so much fun to write. She is a culmination of what I would love to be in my magical world and some characters I have encountered in my life journey… full of strength with a little darkness and some light of course. She is a character you would love to hate because of what she represents yet her dark and mysterious side draws people to her.  She is an unpredictable lone ranger, yet people look for her to help solve their mundane problems. My imagination truly went wild on her. I love her so much; I am seriously looking at starting a totally new series for her. My next book in this series will be featuring her a great deal. I can’t wait.

It is a coming of age story of a young girl from a blended family, tossed in an unfamiliar setting. It shows resiliency, determination and hope even when all looks deem.  It tells us regardless of our age our resourceful and determined we are capable of, if we set our minds on whatever we want to accomplish. Above all, it reminds us that we are able to overcome circumstances; we just need to keep putting on feet after the other.  Our “promise land” is closer than we think.

I love cooking and also watching just laying around the house and watching adventure movies.

Is there a genre(s) that you’d like to write that you haven’t tackled yet?

I am looking forward to writing and romance & adventure novel for adult. Someday, I have the stories in my head already. Just need to pen them down. For now, I am enjoying breaking into the young adult scene and loving every minute of it; as my youth is being renewed on a daily basis through my characters... what do they say about living vicariously through characters? Well, I am there right now.

Besides Jewel Cardwell the main character, Jewel Cardwell’s sidekick, Kaya Darkling, the Sorcerer’s daughter was so much fun to write. She is a culmination of what I would love to be in my magical world and some characters I have encountered in my life journey… full of strength with a little darkness and some light of course. She is a character you would love to hate because of what she represents yet her dark and mysterious side draws people to her.  She is an unpredictable lone ranger, yet people look for her to help solve their mundane problems. My imagination truly went wild on her. I love her so much, I am seriously looking at starting a totally new series for her. My next book in this series will be featuring her a great deal. I can’t wait.

I am so glad you asked.  The Adventures of Jewel Cardwell: Hydra’s Nest is one in the Grimmlyn series. The whole idea started off with me knowing that I would create a series out of it. I felt that the characters were large enough; they had more depth to them that simply creating one book would do injustice to them.

I mentioned earlier that I am considering making Kaya Darkling a star in her own series. Well, to make that happen I am currently finishing the 2nd in the Grimmlyn series: The Sorcerer’s Purgatory. This will provide an opportunity for readers to get to know even closer one of the great characters, Kaya Darkling in the first book. The Cover Reveal of this can be seen:
http://www.worldoffumihancock.com/#!the_sequel/crpz. This is scheduled for release early next year. Stay tuned! 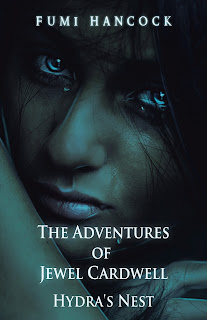 What would you do if you found out you inherited an ancient familial curse?

When free-spirited and more than a little rebellious, seventeen-year-old Jewel Cardwell gained admission to Grayton Preparatory School, a prestigious, girls-only, top-notch private institution nestled in the South African farmlands of Limpopo, little did she know it would begin a trail of mysterious and unfamiliar events, changing her life forever! At Grayton prep, a battle line is drawn between ‘good and evil’ especially when there’s a full moon and dark forces swirl and  turn up in the form of hideous monsters and frightening demons. With her school fre-nemies, rivalry and treachery become the order of the day and Jewel is forced to question everything she thought she knew as she struggles to stay alive in a dubious place riddled with demonic activity!
Armed with a magical secret from her dying grandmother, a golden locket, she sets a new course in motion. In the middle of this whirlwind of events, she is caught between two boys: Darwin Morton, a lad she's known growing up, and Eric Broder, a soccer team leader with a silver spoon in his mouth. Why her love life has to get interesting now is a question she can't answer!

“I welcomed death with open arms, closed my eyes and listened as the aircraft made rattling and shaking sounds through the dreary weather. If this was my time to go, I would embrace darkness, as I had nothing else to lose.” -- JEWEL CARDWELL

Will Jewel be able to solve the mystery before evil is unleashed against those she loves? 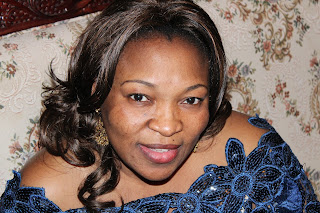 Fumi Hancock is a walking example of how an ordinary person from a shackled life of broken promises and shattered dreams can live a fulfilled destiny. After twenty years of dropping her pen, she picks it right back up again by releasing the first in the Grimmlyn Series: The Adventures of Jewel Cardwell: Hydra’s Nest.

Though graduated with a postgraduate degree in communication arts, and undergraduate degrees in English studies and nursing, she ascribes her writing to her life experiences, which were many times challenging. According to her, the protagonists and antagonists in her novels often come from the darkest moments of her life—a tribute to the fact that something good can come out of mysterious and difficult circumstances, if we choose to turn our challenges around. Age is merely a number where success is concerned. She also pulls some of her characters from her travels around the world—in particular, exotic Africa—uniquely weaving her tales.

Fumi loves to write for young adults, particularly urban fantasy, and paranormal fiction with a touch of romance. She aspires to one day write a mystery/detective novel for the adult audience. But for now, she is content with her young adult audience. With her background in nursing, she gently nurses her unusual characters to life for her readers to enjoy.

She lives in Tennessee with her husband, Dr. David Hancock, and her two grown sons, Bola and Demola Thompson. She cherishes her two stepdaughters, who reside in Michigan.

Behind-the Scenes:  Scenes from the Story