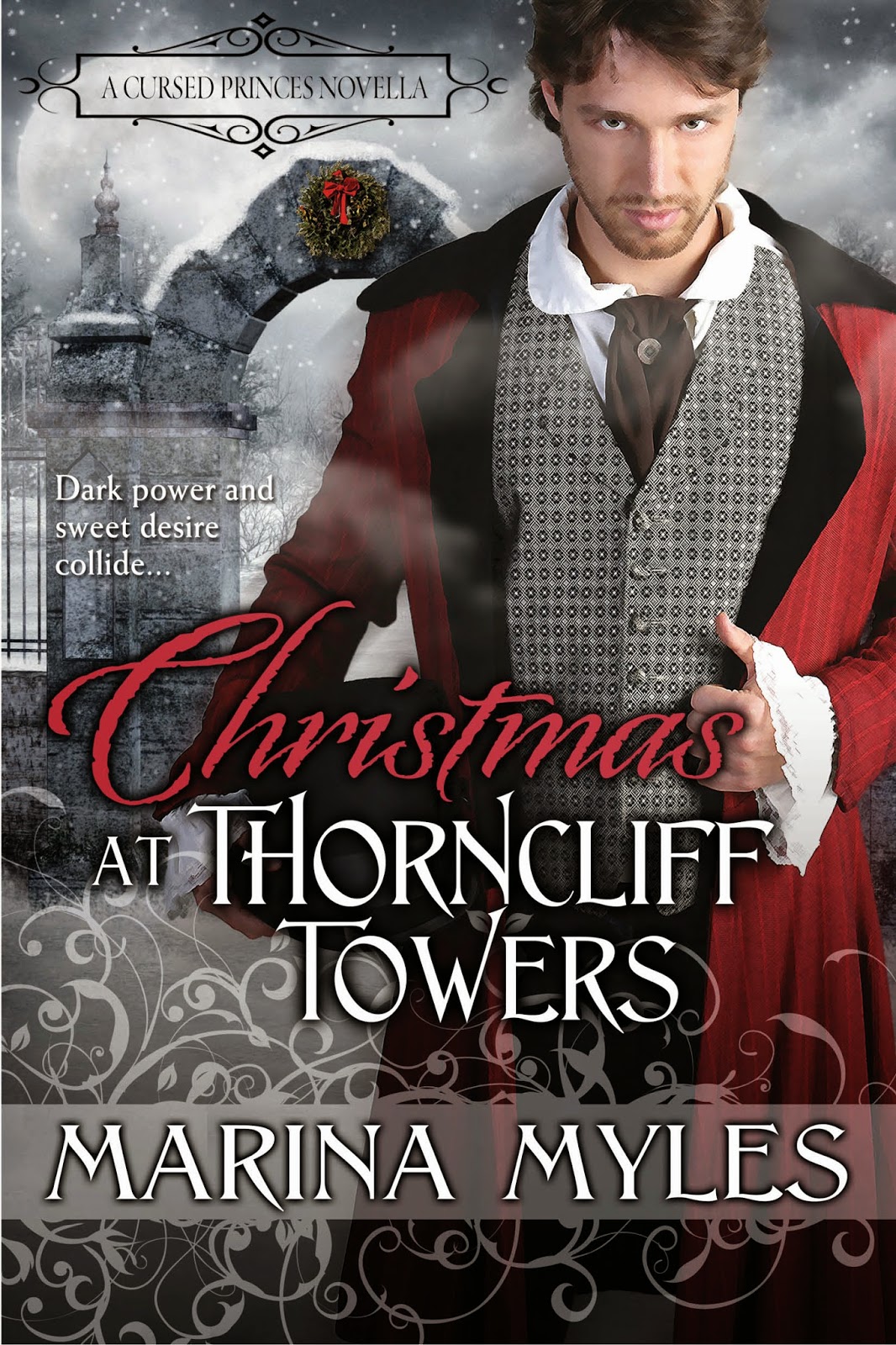 Thorncliff Towers is done up for Christmas, secure against wind and wolves. But Karina Petri is shut out, too, and the gypsy witch wants what’s inside. She envies the gifts, the feast, the pretty clothes, of course. But her true desire is for the love of Constantin Stoica. Her smolderingly handsome childhood friend agreed to serve Lord Draven after his brother was caught stealing last year. He suspects Karina was involved—and it would take more magic than she possesses to make him forgive…

Constantin has always been drawn to Karina’s dark curls, flashing eyes, and reckless ways. But trusting her has proven dangerous before, and this night holds more to fear than most. The wrong decisions could cost him his job, his safety—even his life. But letting Karina go could cost him his heart…

Scooping up a few pieces of bread, Karina slipped out the back door. With the aid of the cane, she made her way to the stable house where the windows glowed a bright orange.
Hearing the crackle of a fire, she entered uninvited. Constantin had his back to her. Shirtless from the waist up as he’d been when she spied on him earlier, he was busy brushing a pewter-colored mare. The chore set his tendons into a fluid stretch and his biceps into a rippling bulge.
Karina shut the door with a loud clatter. He whirled around—his foul expression softening as he perused her new appearance.
“Karina. You look…nice.” Then he seemed to remember that he was angry with her. Resuming his task, he spoke in an icy tone. “I came here to be alone.”
She ignored his comment. “I brought you some bread since you missed dinner.”
“Thank you,” he said curtly. “Leave it on the workbench, please.”
She did and strode toward him. Gathering her courage, she released the cane and touched his solid shoulder. “Do you like my dress?”
He snatched a look at her but then avoided her eyes. “It’s beautiful.”
“You hardly saw it. Come. Take a long look.”
Gulping, his stare swept over her tiny waist, rounded cleavage, and elegant hairstyle. “You look very—different.”
She smiled seductively. “Is that a compliment?”
“Yes.” His voice was a growl. “You’re stunning.”
Motivated by the jealousy she felt over his connection with Lydia Brentwood, Karina slid both hands up his chest and laced her fingers behind his neck. “You’ve always been my friend, Constantin. But I missed you in another way when you left our Gypsy camp.” She paused. “Did you miss me?”
He untangled her fingers. “I’ve missed your companionship. That’s all.”
“Is that all I’ll ever be?” Frustration coated her voice. “A companion? A friend?’
He held her by the arm and she could swear she saw agony in his forest-green eyes. “We lost our parents at a young age,” he said. “That’s why we became friends, Karina. We had that in common.”
“You never thought I was pretty?”
“I’ve always thought you were beautiful, but you scared me. I had to grow up and be a father figure to Viktor. I couldn’t afford to let your rebellious ways distract me.”
“So that’s the reason…” her voice trailed off.
He released her arm and anchored his hands on his hips. “You were constantly defying authority and getting into mischief. I was too straight-laced—too responsible—to join in.”
“Sometimes opposites attract,” she suggested. “Besides, you’re a grown man. Are you still scared of me?”
His gaze dropped from her eyes to her mouth. Attraction replaced the agony in his stare. He moved closer. “I’m not afraid. But I am lonely.”
“I can see why,” she murmured. “The smug people at this mansion lack the Gypsy fire you’re accustomed to.”
Their lips hovered inches apart. A whisper of air slipped into Karina’s mouth as she parted her lips. Constantin nearly kissed her. But then he stepped back.
She wasn’t giving up that easily. “I liked the feel of your hand on my leg,” she purred. “If you let me touch you, I can erase some of that loneliness.”
As slow as a ribbon flutters in a quiet breeze, she feathered her fingertip up his arm. Under her touch, his skin burned as hot as lava. She knew in that moment that he was going to kiss her.
With eyes blazing with desire, he craned his neck forward and clamped his mouth to hers. Karina’s whole world changed in that moment. Responding to his warm lips, she pressed herself to his chest. And when he allowed his tongue to slip forward, her heart thrummed wildly.
“My God,” he said gruffly. “You smell like summer rain.”
Their bodies stayed molded together by pure lust. The feel of his muscles and his intoxicating scent reminded Karina that she’d never want any man but him. Would Constantin make her his tonight? 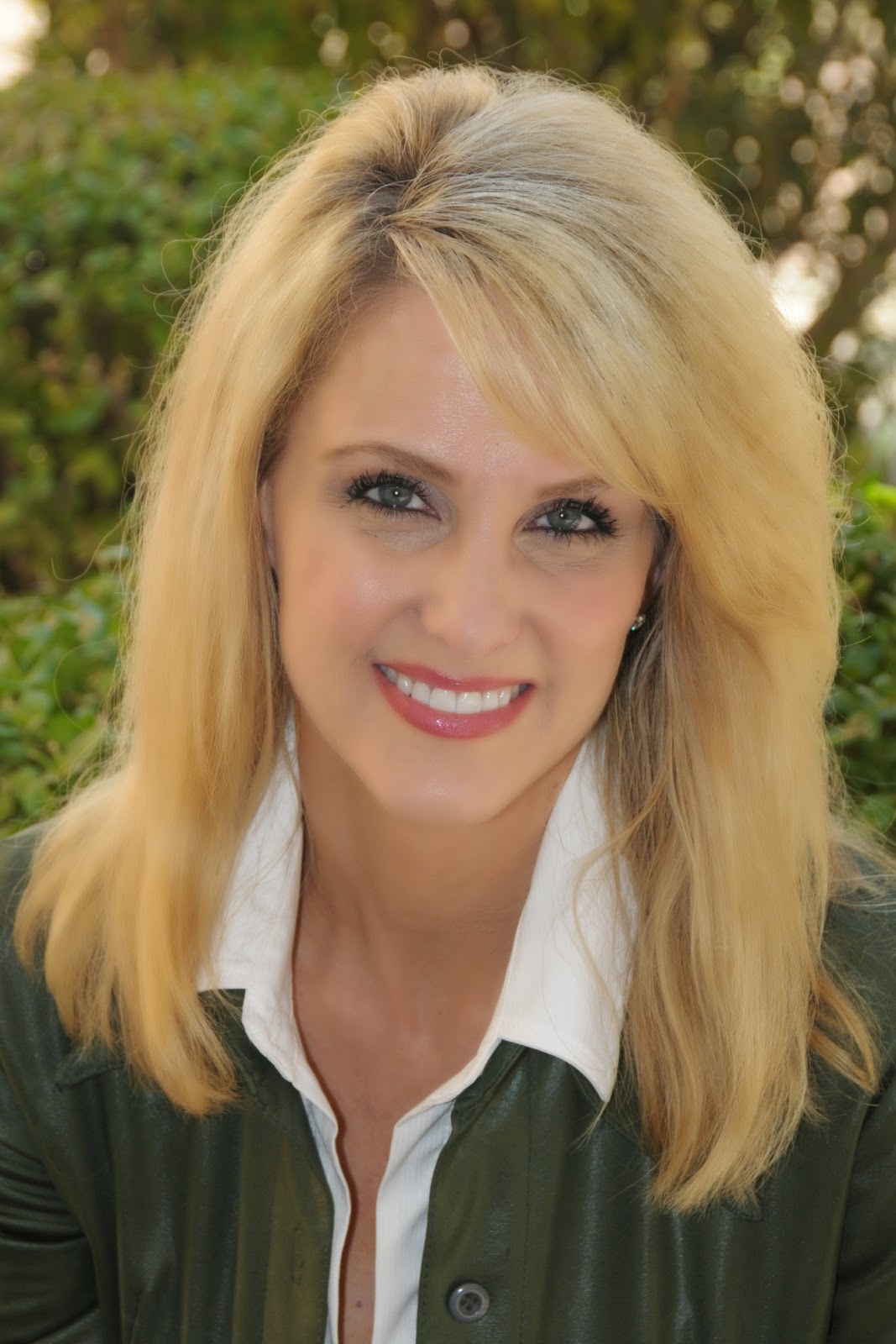 Marina Myles’s love of books began as soon as she read her first fairy tale. During her college days, she received degrees in English Literature and Communications—and enjoyed the unique experience of being a Dallas Cowboys Cheerleader.

Now that she lives under the sunny skies of Arizona, she hasn’t left her glamorous life behind completely. After all, she gets to divide her time between her loving family, her loyal Maltese, and worlds filled with fiery—but not easily attained—love affairs.

Love In Every Page
http://loveineverypage.weebly.com/blogs.html 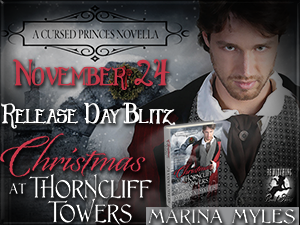