Half Life by Paul H.B. Shin 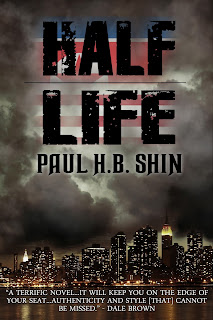 The year is 1997. North Korea is suffering from a devastating famine that has shaken the foundation of the ruling class. A series of high-profile defections to the West has lead the reclusive country's leadership into the grasp of paranoia.

Nuclear scientist Han Chol-Soo is on a tenuous diplomatic mission to the United States. There he is forced to embark upon a high-stakes pursuit after his wife disappears with their newborn son. Paralyzed with fear at the repercussions of her decision, Han turns to his colleague Park Jun-Young for help -- a man that he suspects is an intelligence operative. He soon regrets his decision as Park cuts a swath of mayhem in the name of helping Han, and the chase forces Han to confront the harsh realities of his home country.

“Half Life is a terrific novel. Right from the start you'll be drawn into many dark worlds—politics, espionage, and North Korea—and it will keep you on the edge of your seat right until the last page. Paul H.B. Shin’s authenticity and style cannot be missed.” –Dale Brown, New York Times bestselling author of Starfire (William Morrow)

“A gripping, taut espionage thriller, Half Life is enriched by the love story at its core and the refusal to give simple answers. I loved it.” –Robert Ferrigno, bestselling & award-winning author of Heart of the Assassin (Scribner)

“Paul H. B. Shin wraps an engaging tale of espionage and intrigue around a failed marriage in his new international thriller, Half Life. With sure-footed prose and vivid characterization, Shin takes readers inside the paranoid claustrophobia of North Korea’s political world, where even high-ranking diplomats live in constant fear. With North Korea's nuclear arms program as a backdrop, the eminently believable and thoughtful plot will have readers wondering if they're looking at tomorrow's news. A well-wrought debut.” 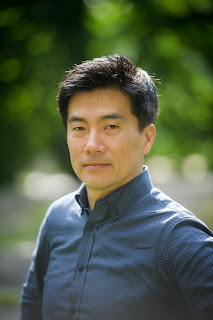 Paul H.B. Shin’s debut novel follows a career as an award-winning journalist for more than 20 years, most recently for ABC News. He previously wrote for the New York Daily News. He was born in South Korea and lived in London during his childhood. He now lives in Brooklyn, New York.


a Rafflecopter giveaway
Posted by Wenona at 3:00 AM