I’ve always written, from the time I was a kid, through high school, college and grad school. It got more difficult to find time to write once we had kids, because I was also working full time. But I managed to steal a few hours here and there. My husband and I would trade off nights we put the kids to bed, and on my ‘off night’, I wrote. I got up at 5:30 in the morning on Saturdays to get a few hours to myself before the house woke up. I got up early over holidays and on vacation to sneak in more writing time. Gradually, a novel came together.

When I started my own business after I left my corporate job, I scheduled two days a week to write, and three days to handle clients, with the weekend for family stuff.   I polished up the manuscript, pitched agents, eventually found an agent, and he found me a publisher.

That was the saga of The Summoner, the first novel in my Chronicles of the Necromancer series, back in 2007. My kids are in their twenties now, but they say that they regard the protagonist in that book as their ‘invisible, older brother’ because I was always talking about Tris like he was real.

I explained to the kids that my writing income was important to pay for their college tuition. The next thing I knew, they were recruiting their friends and teachers to read the books, pitching the series to the school librarian, and dragging strangers over to my signing table at book stores. They’ve been on vacations that included location scouting side trips, and experienced me going into ‘research mode’ in museums and historical locations. They’ve attended book conventions with me for a decade, and can set up a booth and work my table like true professionals. Sometimes, they even beta read the manuscript to provide suggestions pre-publication. So writing books became a family effort.

My oldest daughter went with me to Charleston for a business convention in late 2012. We explored the city together when I wasn’t in meetings, and talked about how it would be perfect for an urban fantasy series. She helped me brainstorm possibilities.

Two years later, my Deadly Curiosities series launched, set in Charleston, with a main character who can read the history and magic of objects by touching them, and an antique store that is a front for a coalition of mortals and immortals who save the world from supernatural threats. Tangled Web is the third novel in this series, but there have also been thirteen short stories and three novellas in that fictional world, gathered now in two collections.

Fast forward, eleven years and a whole bunch of books and series. The kids are in college, in grad school, or graduated and off married and ‘adulting’. After years of helping when he could around a busy corporate travel schedule, my husband came into the writing business full time at the end of 2010. He handles a lot of the artwork, royalty tracking, editing, formatting and management aspects, as well as brainstorming and co-authoring. We now have four co-written series, and work from home together all day, every day, along with our two dogs.

I won’t claim to ‘balance’ my work and life—especially not when I’m on deadline for a book, or in the thick of travel for convention season. But I do try to ‘juggle’ by keeping family intimately involved in the process, so they feel included, not excluded. I do my very best to take the majority of time off over holidays and vacations to do ‘real people stuff’ and enjoy the downtime. I don’t know that it would work for everyone, but it works for us! 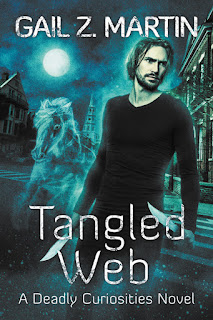 Tagline: Keeping Charleston—and the world—safe from supernatural threats one cursed object at a time!

Cassidy Kincaide runs Trifles & Folly in modern-day Charleston, an antiques and curios shop with a dangerous secret. Cassidy can read the history of objects by touching them and along with her business partners Teag, who is a Weaver witch and Sorren, a 600-year-old vampire, they get rid of cursed objects and keep Charleston and the world safe from supernatural threats.

When zombies rise in Charleston cemeteries, dead men fall from the sky, and the whole city succumbs to the “grouch flu,” Cassidy, Teag, and Sorren suspect a vengeful dark witch who is gunning for Teag and planning to unleash an ancient horror. Cassidy, Teag, and Sorren—and all their supernatural allies—will need magic, cunning, and the help of a Viking demi-goddess to survive the battle with a malicious witch and an ancient Norse warlock to keep Charleston—and the whole East Coast—from becoming the prey of the Master of the Hunt.

“So you brought an audience this time, Teag? I didn’t know our lessons were so entertaining.” Mrs. Teller gave me a big smile and hugged me tight. I got a hug from Niella, her daughter, as well. Mrs. Teller led us into a room she had repurposed as her studio and motioned for Teag and me to have a seat. Niella came in a few minutes later with a tray that held a pitcher of sweet tea and four glasses, and she put it on a side table.
“So are you here to see what this boy’s been up to, or are you thinking to learn some weaving yourself, huh?” Mrs. Teller fixed me with a gaze that seemed to see right down to my bones. She was in her late sixties, with short hair sprinkled with gray, mahogany skin that showed no signs of aging, and piercing black eyes. Niella took after her, in her looks, her lilting accent, and her talents.
“I think I’ve got enough with my touch magic,” I replied. “I’m leaving the Weaving to you.”
Mrs. Teller and Niella are some of the best sweetgrass basket makers in Charleston. They have a regular spot down at the Charleston City Market, and their baskets fetch high prices—for good reason. Not only are they true artists with a difficult craft, but Mrs. Teller’s Weaver magic gives a “little something extra” to all of her creations. Oh, and she’s also a damn fine Hoodoo worker, a Root woman of high regard.
Mrs. Teller laughed, a rich, throaty sound. “Let me know if you change your mind.”
I glanced up at Niella and thought she looked more tired than usual. “Have things been busier than usual?” I left it up to interpretation whether “things” meant the market or the Hoodoo.
“Well now, that’s a tale in itself,” Mrs. Teller said. Out of habit, she picked up an unfinished sweetgrass braid, and her fingers flew while she talked. Teag took down a half-woven basket of his own from a shelf and returned to sit next to me. Where Mrs. Teller’s muscle memory was born from more than a half-century of practice, enabling her to bend and twist the sharp dried grass without slicing up her fingers, Teag moved with careful caution. He’d learned the hard way, and I’d seen him come into the shop with fingers covered in bandages more than once.
“Fill us in,” I begged. Sharing information was essential for those of us in the supernatural community in Charleston, and Mrs. Teller ran in some circles that Teag and I usually weren’t part of.
“Trouble’s brewing,” Mrs. Teller said, and Niella settled into a chair beside her, picking up her own half-done basket to work while we talked. “People can feel it coming, like a storm over the ocean.” The sweet, earthy smell of the seagrass filled the air.
“What kind of trouble?” I asked. Teag’s focus was on his basket, and I knew he juggled both the complexity of working the stubborn grass, as well as the magic he channeled through the weaving. He might be listening, but he had too much going on to talk.
“Don’t know yet, that’s the truth of it,” she replied. Her Lowcountry accent rounded her vowels and softened her consonants, and added a musical quality that I found mesmerizing. “But it’s big. I feel that in my bones, and my bones don’t lie.”
I tried to track how she wove the sweetgrass, but her fingers practically blurred with the speed of experience. Even without handling the baskets, I knew they projected a calm, protective resonance that probably attracted buyers as much as the beauty of her craftwork. The baskets of hers that I owned were some of my favorite decorations because they always made me feel better being around them.
“Just a feeling, or have you seen something?” I pressed.
“What I’ve seen is people making a beeline to my door, asking me for gris-gris bags and goofer dust,” she said. “Folks be saying that they can’t sleep, or that they hear noises but nothing’s there, or they catch a glimpse of shadows out of the corner of their eye.” She shook her head. “Uh, uh,” she tutted. “That’s not good. Not good at all. So I fix them up best I can, show them how to put down the dust or put a dime in their shoe or fix their mojo bag and send them on their way, and the next day, I got twice as many people waiting for me, because they all told their friends.”
While the boom was good for business, I knew that whatever had people unnerved sounded like the kind of problem that landed in my lap, sooner or later. Sorren is part of the Alliance, a secret organization of mortals and immortals that take care of supernatural threats. He founded Trifles and Folly with my ancestor nearly three-hundred-and-fifty years ago, and our store is one of dozens Sorren has all over the world. The stores serve as outposts to get dangerous magical or haunted items out of circulation and shut down things that go bump in the night.
“What kind of bad dreams?” I asked, although I couldn’t resist a glance in Teag’s direction, but he never looked up from his work. “Is there a common thread?”
Mrs. Teller shrugged. “There’re all nightmares, for sure. Most people won’t speak of their dreams because they think saying it out loud gives the dreams power. Maybe so, maybe not. But the ones who would say told me they were being chased, in the dark, but they couldn’t see what was behind them. Except for red eyes.”
Teag didn’t say anything, but he swallowed hard, and his fingers paused for a few seconds.


I swallowed hard, too. “Yikes,” I managed. “Any idea what might cause that?” 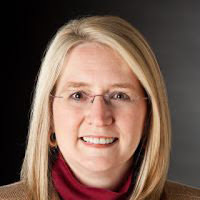 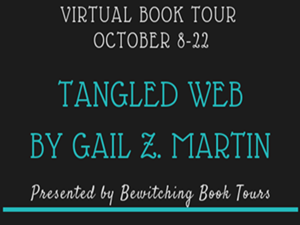